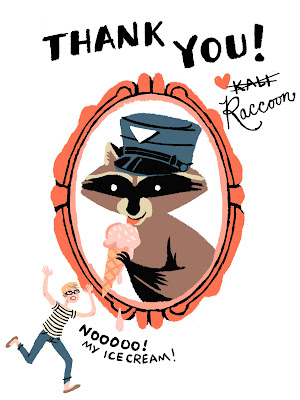 I have been overwhelmed by the positive response to my Amtrak book--I haven't been able to thank all you pals personally, but I really appreciate everyone's kind posts/tweets/emails! You've made my week!

There's been some questions as to where to get the books-- they should be being sold on Amtrak trains, but may possibly be in the stations as well. If anyone encounters one in the wild, I'd love to hear about it!
Posted by Kali Ciesemier at 1:28 PM 5 comments:

For 4 months last year I was occupied with creating a 32 page kids activity book with the good folks at Arnold advertising for Amtrak. The book was 'released' on National Train Day (May 7th) with a print run of 150,000. I believe you can buy the books on the trains, but I haven't heard any reports of people finding them yet! (soon, I'm sure!)
I wanted to share my work with you guys, and give a major thanks to the team I worked with at Arnold and everyone who was involved in the project, which included Jamin Hoyle, Lisa Biskin, Andrea Ricker, Bob Petkofsky, Bill Cutter, Meredith Wadeson, and Christine Vaz. Thank you!!

I haven't included any of the added text with my images, except for the titles of the pages, all of which I hand-lettered (so i won't spoil it for you in case you want to complete the activity book!) ;)
This post is going to be a little longer than normal due to the amount of work I did, so bear with me...

First up, the cover sketches!
Arnold contacted 5 artists, including me, to create a potential cover for the book and give Amtrak some choice in what style they wanted to go for. The cover needed to be able to fit with the Amtrak aesthetic to a certain point, but also be fresh and kid-friendly. A lot of Amtrak's logos/advertisements already have a slight art deco feel to them, so I thought the kids book could also have a sort of decorative graphicness to it that went along with the style. Here's the sketches I sent to them: 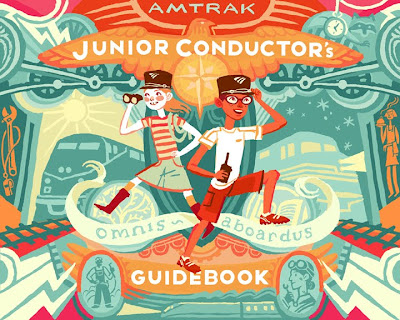 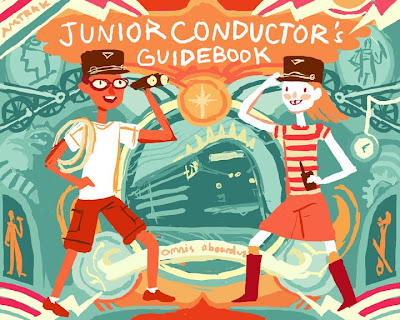 They ended up choosing the 1st sketch as the direction they wanted to go for the kid's book, and my adventure began!

The Final Images!
The Arnold crew had worked with Amtrak to create a rough outline of what would be going on each page, and Lisa Biskin did all the copy writing for the book (they didn't expect me to come up with the word search or anything, just the illustrations for it).
Jamin provided me with rough thumbnails of what should generally be happening on each page, but gave me a lot of creative freedom to shape the book my own way. For instance, on some of the text-heavy pages, he told me there needed to be some sort of decorations around the edges.


After thinking about the kinds of picture books I liked as a kid, I came up with the idea of creating tiny landscapes that the amtrak train would be rolling through. Some examples:

(this one doesn't have a train in it, but that's because you're supposed to draw your OWN train in the trainyard!)


There were also some page borders that had more of a story to tell: 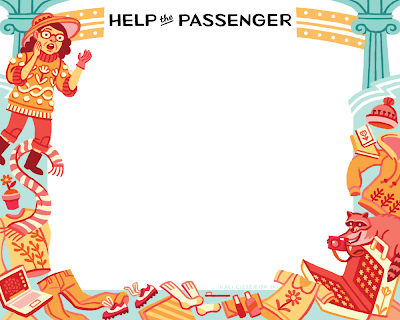 (it was decided that Raccoons would be the villain of choice in the activity book-- you'll see them sneaking onto several other pages!)


And of course a variety of full spreads:

(this is probably one of the most time-consuming images I've done....when I was sketching it out in the beginning, I tried to only allow 15 minutes per person, and there's about 70 or 80 people in there. Can you spot Sam & I in the picture?? Hint: I'm drawing!)

(if you look close, I've made recurring characters throughout the book that show up on many of these character or group pages. The flower lady, the trophy man, the greaser, the archaeologist, the short man/tall woman couple, the cowboy, the sports fans, the magician, etc etc...)

The finalized cover and back cover: 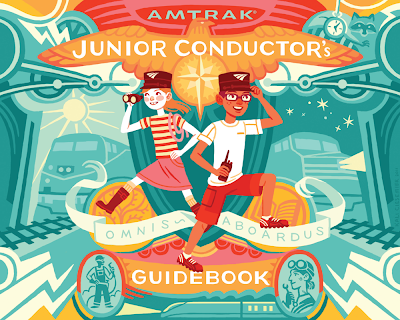 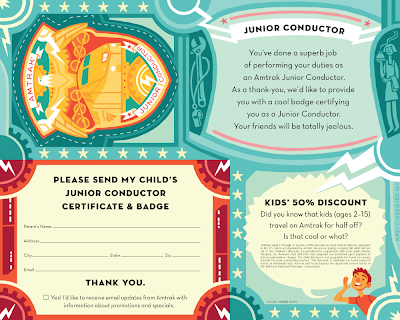 Amtrak requested that I simplify the cover a little more, but I was able to use some of the discarded elements on the back cover. The badge there can be punched out & worn proudly!

Finally, some photos of the physical book-- it printed out really great & the typography and layout are wonderful! 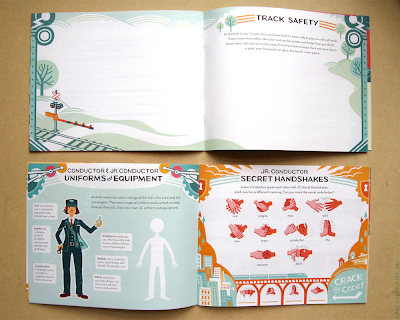 (fun fact: I DID make up all the Jr. Conductor secret handshake moves. Try 'em out yourself!) 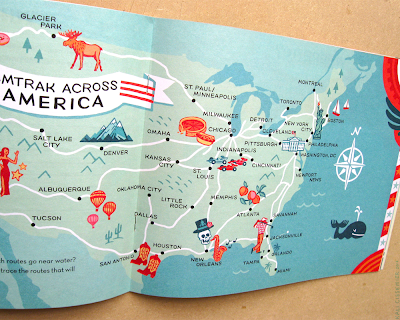 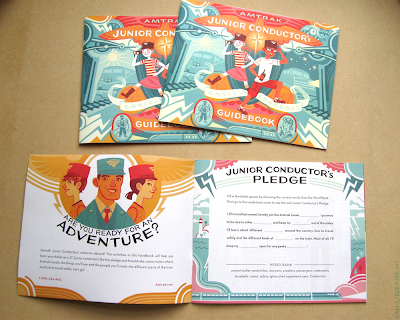 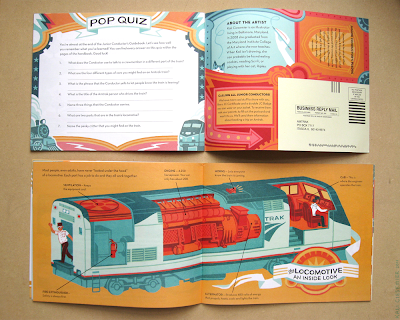 I hope you check out the book yourself the next time you take a train! There's still a few pages I didn't show. All in all, this was a totally unique and exciting experience for me, and I felt so lucky that I was able to make the book my own, as well as Amtrak's. I hope I get a chance to do more projects like this.
Posted by Kali Ciesemier at 4:00 PM 24 comments: