Another recent illustration for the Boston Globe-- this time for an article by a Masters in Music Composition postgraduate about his struggles finding jobs that relate to his major. Thanks again to AD Ryan Huddle! 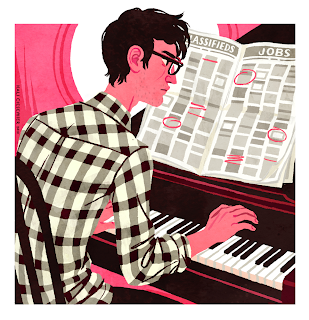 He writes that the whole major was a sort of pyramid scheme: there was no music composition positions he could go into upon graduation other than teaching music composition to the next round of students. He also added that liberal arts majors might be better served in other more directly applicable fields like science, technology, and math.

The article was interesting to me, as a fellow liberal arts graduate (and teacher!). There's definite pros and cons to choosing a career you're passionate about, but that may not hold as much monetary promise as other careers. (though I have no regrets) However, as difficult as the illustration field can be, it seems like there's a lot more jobs in visual arts than music composition, so it's not quite the same situation. 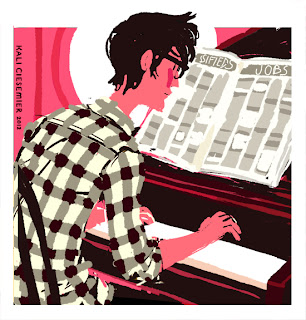 Bonus-- I just looked up a photo of the writer, Adam Ragusea, and was delighted to find that my illustration actually appears pretty similar! I had no idea! I guess my imagined image of a music composition major fits pretty well with the real thing.