This past weekend I had an illustration feature in Boston Globe Magazine about how Red Sox fans can find some common ground and an enjoyable vacation in Yankee-zone New York. I didn't end up drawing a single baseball player, but I sure drew a lot of hats! (AND designed a pair of yankees sunglasses!) I have little to no interest in baseball, but I really enjoyed this project because of being able to collaborate with my art director Ryan Huddle.

When Ryan first contacted me, he was looking for a long illo to go along the top of the 2 pages.

When he got the sketches, he liked the first crowd scene and thought it might work better running along the bottom of the page, maybe with some more "I <3 NY" type additions.
From there, i suggested having some times-square-ish buildings running up the sides of the page with NY-centric billboards: 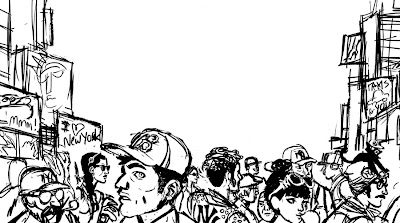 He approved & we were off!
I had a busy schedule at the time and had to pull an all-nighter to finish this one, but I re-discovered 'The Shadow' on Netflix while I worked. Now whenever I look at the final I think of The Shadow and Alec Baldwin, which aren't the worst things to think of I guess. 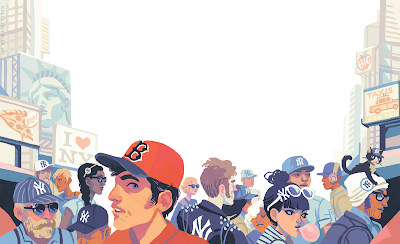 I was happy with how it came out, but I was REALLY HAPPY when Ryan showed me the final layout with the text he added! SO AWESOME! 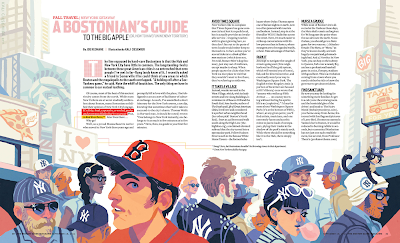 One of the thrills of illustration is getting your pictures paired with great design. It's like making a nice dessert and seeing it combined with a delicious meal and then eating it all.
Posted by Kali Ciesemier at 10:24 PM 3 comments:

Hey! Are you going to be at SPX this weekend? I will be wandering around on Saturday on a buying spree and I drew this 100% accurate visual reference for what my little traveling gang will look like. I'd love if you said hello! 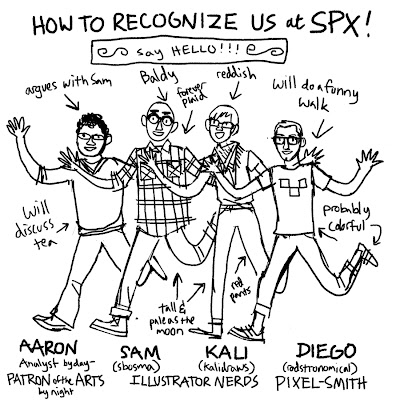 I will have 50 new postcards to give out! These postcards! 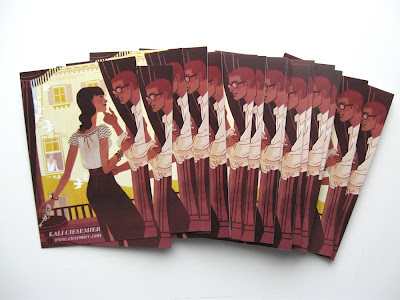 I also feel compelled to mention that I got them from ShortStackPrinting.com. Originally I wasn't going to be able to get new postcards in time for SPX, because the expedited shipping from Overnight Prints and Jakprints etc. was too expensive, and I mentioned this on twitter. ShortStackPrinting saw my tweet and offered to upgrade me to overnight delivery for free, I took the offer, and here we are! (it was inexpensive & the printing quality is good, but the cardstock is a little thin --perfect for handing out at a con or expo, though)

Next year Sam & I might even get a table. See you there!
Posted by Kali Ciesemier at 10:06 AM 1 comment: