...aren't always the most relaxing. I was asked to illustrate an essay in Boston Globe magazine written by an author who prefers to just stay HOME during the summer and let everyone else clog up the roads and sweat out in the heat.

My AD suggested an uncomfortable roadtrip, and I thought that adding a glimpse of the cool and relaxing house she's leaving behind would be a nice contrast. (as a homebody at heart, I sympathize) 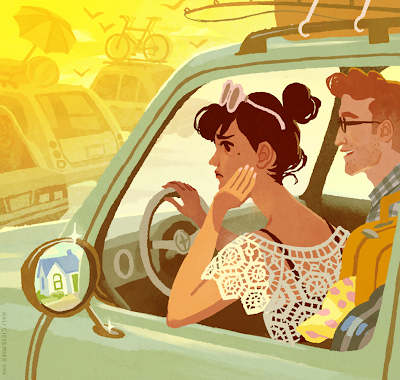 I myself will be moving apartments not once but TWICE this summer--in two different states no less--so I'm getting geared up for my own "uncomfortable roadtrip" haha. But! I'll be living it up in Brooklyn at the end of it, so here's to some future summer fun!

Thanks again to my AD Ryan Huddle!
Posted by Kali Ciesemier at 4:08 PM

Hi – It’s good to read such interesting content. I agree with much of what is written here and I’ll be coming back.
Thanks again for posting such great reading material!! To get more relevant information visit here
Bay cruise San Francisco